Jordan’s longstanding focus on human capital development has become renowned the world over. From boasting one of the highest ratios of engineering graduates to population globally, to having similarly impressive numbers in medicine and ICT, it comes as no surprise that the Kingdom has been riding the waves of a highly educated and skilled workforce. 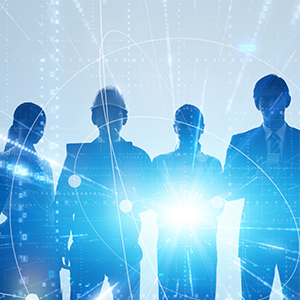 In the 1970s, Jordan was one of the first countries in the world to perform successful open-heart surgery and kidney and liver transplants, and is now regarded as a global player in in-vitro fertilization. That being said, these accomplishments could not have been achieved without extremely talented and competent human resources.

In the 1990s, the Kingdom emerged as a regional leader in technology development, with three patent filings in the United States for AI-related technologies. Jordan was also one of the premier countries to recognize the use of ICT as a means for effectively disseminating knowledge, with multiple progressive Jordanian companies producing computer-based training and educational software in banking and financial services, soft skills and general education. With the proliferation of the internet, this forward-thinking later evolved into e-learning software, which is still being used throughout the Arab World, even spreading to North America and Africa. Backed by a young population, Jordan has demonstrated an impressive ability to detect, enhance and leverage unique technology opportunities throughout the past decades.

This prowess has endured over generations, as evidenced by the up-and-coming Jordanian entrepreneurs catalyzing innovation and consistently coming out on top in regional and global startup competitions. Jordan represents only 3% of the Arab World, yet 6% of its startups, with Jordanian entrepreneurs winning 27% of the awards presented at the 2019 World Economic Forum’s Regional Business Plan Competition. Such feats are true testament that Jordanian innovation is not only alive, but also thriving, whilst reflecting a replenishable human investment opportunity for local, regional and international investors.

Within this context, the Innovative Startups and SMEs Fund (ISSF) – the largest investment fund of its kind in Jordan – was founded to identify, support and harvest innovation opportunities grown out of the local entrepreneurial ecosystem. From the outset, the ISSF has been driven by a mission to facilitate the establishment of funds that invest in local early-stage startups and SMEs; make direct investments in innovative, export-oriented and scalable local startups; and implement initiatives that improve the capabilities of Jordanian entrepreneurs and startup teams through training, capacity building and targeted incubation and acceleration programs.

To this end, the ISSF has closed investments in eight funds during the last two years, including a Chinese venture capital fund and several regional funds. The ISSF has an additional five funds in the pipeline, one of which is UK-based. In the bigger picture, these steadfast efforts ultimately seek to enable promising entrepreneurs to transform their pioneering projects into sustainable companies that generate jobs for Jordanian women and men.

Jordan’s steady attraction of foreign funds indicates faith in the capable local entrepreneurs and in their business ideas and technical competencies. Many entrepreneurs who have secured foreign investment are domiciled abroad, but most of them have and will continue to maintain substantial operations in Jordan, as access to a much-celebrated talent pool is an advantage very few can do without.